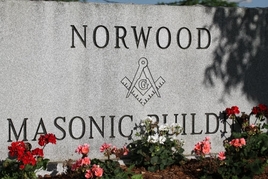 In the winter of 1860 – 1861, when secession and disunity were the topics of the day, seven Masons met to form an act of union.  They met on February 25, 1861 in the Village Hall of then South Dedham, Massachusetts and opened the first communication of the newly chartered Orient Lodge.  Since that first meeting nearly one hundred and fifty years ago, Orient Lodge of Norwood became and continues to be one of the strongest and most active Lodges in the jurisdiction of the Grand Lodge of Massachusetts.  The following is not meant to be a precise history of Orient Lodge but will focus on the members and outreach of the Lodge to the Norwood community for the past twenty-five years.

For all of its history, Orient Lodge has been very much a part of the Town of Norwood. During the past twenty-five years, Orient Lodge has reached out to serve the community of Norwood.  Under the auspices of Wor. David J. Laronde,  the Lodge established one of the first Masonic Angel Funds in 2000.  The purpose of the fund is to come to the immediate assistance of children in need when requested by the local schools.  Since its establishment, the fund has contributed over twenty-thousand dollars towards the assistance of many such children and, it remains a strong link to the community.

On January 29, 1996, under the direction of Wor. Thomas M. McClintock, the Lodge hosted its first Ten Outstanding Norwood Youth Awards night.  T.O.N.Y., as it has become known, has continued to annually recognize young men and women who have rendered exceptional service to their community.  In the past 11 years, the Lodge has given $1000 savings bonds to 12 worthy recipients at the T.O.N.Y. awards banquet.  On May 16, 2008, under the direction of Wor. Thomas B. Miskell, Jr., the Lodge hosted it first Teacher of the Year Award night. T.O.Y. seeks to give special recognition to the dedicated teachers from Norwood schools.  Each year, the winning teacher was awarded $1000 and the teacher’s school also received a $1000 award.  Every nominee for both the T.O.N.Y awards and the Teacher of the Year also was recognized with a plaque and an award.

From time to time, Orient Lodge has participated in the Norwood Fourth of July parade and the Memorial Day parade. In May, 2006, the Lodge was instrumental in the erection of a stone monument dedicated to Norwood police and firefighters. The Lodge has also participated in Norwood Day activities, opening the Lodge building for tours and a model train display, as well as manning a booth at the corner of Day and Washington Streets.

From that first Communication on February 15, 1861, until 1915, Orient Lodge met in the Village Hall located at the corner of Washington and Cottage Streets.  For two years, the lodge met in Conger Hall at the corner of Washington Street and Railroad Avenue.  On September 17, 1917, the Lodge’s current building,  at 76 Day Street, was dedicated.  Its cornerstone had been laid on August 12th of the preceding year.  Over the past twenty-five years, many improvements have been made to the building.

In 1988, an elevator was installed that connected with the banquet hall and the first and second floors.  This has proven to be very useful to many of the members who are finding it difficult to negotiate the staircases.  During the years 2002-2003, the kitchen was completely gutted and replaced with new flooring, cabinets, counters and appliances.  The banquet hall was redecorated and a new wood floor was installed.  The downstairs bathroom was also gutted and a new bathroom was built.

The outside of the building has not been neglected with extensive landscaping done.  In 1999 a granite marker was installed at the front of the building, proudly announcing that Masonic Bodies met within.